From Lane’s Hotel to The White Dog Bistro

No one can say for sure but for at least 175 years the structure here at The White Dog Bistro has proudly stood its ground just across from the Mathews Court House Square. In the course of those years the structure has worn many hats. The building has been various hotels, home to local legends (including an MGM “Goldwyn Girl”), a day care center and now a rejuvenated inn & bistro.

It seems that whenever there is interesting history, there is debate. It has been said that architect Richard Billups built the existing structure here at The White Dog Bistro as well as the historic Mathews Courthouse across the street in 1795. In fact, a historic marker planted firmly in the ground just outside the court house says just that.

However, local historian, Becky Foster-Barnhardt revealed that according to land tax records and deeds of ownership, the original structure here – as well as the courthouse building as it stands today – were erected sometime around 1840.

No matter where you place the structures origin, it’s been a Mathews Court House classic ever since. The following are significant points in history as noted by Becky Barnhardt.

1840 – Walter Gardinier Lane erects the original structure and opens Lane’s Hotel. Walter’s son, Gen. James Henry Lane, was regimental commander of the Stonewall Brigade and was the highest ranking confederate officer from Mathews in the Civil War. It is believed that he grew up here at The White Dog Inn. The Lane family owned the property through 1878.

1915 – Charles D. Hudgins purchases the property and resides with wife and their sons Bailey Dee Hudgins and C. Bernard Hudgins. The original plan was to start a hotel but Hudgins could not get enough men to work the hotel due to WWI. Hudgins’ sons, Bailey Dee and C. Bernard were both pharmacists and co-owners of Hudgins Drug Store. 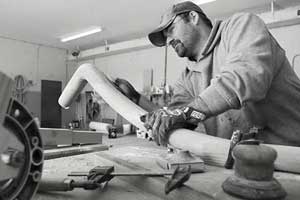 2009 – 2012 – Proprietors Tammye And Court Van Clief extensively renovate the entire structure and open The White Dog Inn. With help from contractor “Dib” Goodrich, his four sons and an all local crew of plumbers, electricians, carpenters and painters, the Van Clief’s realize their vision of a classic eatery and b&b.

Much of the original integrity of the building was maintained in the course of remodeling. Beautiful 1/2″ thick pine-plank flooring was restored wherever possible throughout the structure and a replica of the front door was crafted to match the original design.

An exact match of our third floor demi-lune window seen at right can be found on many significant structures throughout the county including the historic courthouse just across from The White Dog Bistro.

2013 – Mac and JC Casale purchase the property and open The White Dog Bistro.

At the same time, they bring on board Chef Walter Wilkes to revamp the menu and put the White Dog Bistro on the Culinary map of Virginia’s finest.

2017- present – Chef Walter is joined by his wife Amanda to take over the Bistro as business owner and operator, while Mac and JC work on their local “sister projects” (and their tans.)