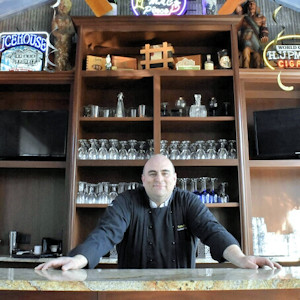 Chef Walter Wilkes describes his culinary career as beginning humbly 25 years ago with an opportunity to take on an apprenticeship with a highly decorated ACF Mentor and Culinary Institute of America Alumni. The establishment, dubbed The Red Sky in Deltaville, Virginia is what he calls “hole in the wall fine dining”. Changing the menu nightly and eventually working through all the positions of kitchen, the owners named him Executive Chef in the wake of his mentor striking out on his own. From there, doors opened to move quickly in the ranks of five star rated establishments such as Colonial Williamsburg’s famed Trellis Restaurant, and The Red Fox of Snowshoe, West Virginia, described by Fodor’s Travel Guide as one of the Top 25 Restaurants in the US.

Upon returning home to what the locals refer to as “the Rivah” or sometimes simply as “God’s Country” , he participated as Executive Chef for the set-up of food and beverage and catering operations with several historically registered bed and breakfasts and small inns, and consulted as Chef de Cuisine for the multiple locations of the fine dining establishment de’Medicis. He eventually landed for many years at the prestigious Tides Inn as Banquet Chef, Rounds Chef, and Sous Chef for the famed hotel. Then in 2005 he was invited to participate in the Grand Re-Opening of Yorktown’s Historic (Nick’s) Riverwalk Restaurant, rebuilt from the destruction of Hurricane Isabel, making the rounds as PM Chef, AM Chef, Banquet Chef, and then Executive Sous Chef, over the course of eight years.

Which leads us to the year 2013 where an unnamed name dropper, a friend of a friend, knows a chef that would be a perfect match for restaurant visionaries Mac and Jc and the Grand Re-Opening of their recently purchased White Dog Bistro, formerly known as The White Dog Inn. Incorporating his barrage of experiences into his own style of “Refined Comfort Foods,” he has merged his classical European training, the Creole and Italian influence of his mentors, and his own Chilean roots into his own very unique “Cuisine Without Borders,” as he describes it. His passion for fresh food leads him to seek out the local watermen and farmers in the area for the best of what Rivah Country has to offer. Likewise, it is his desire to turn that into an overall dining experience that is also the best of what the Rivah country has to offer. It seems to have worked.

For six years now, as the Bistro’s Executive Chef, he has racked up over 60 coveted “Best Of” magazine awards from Coastal Living, Chesapeake Bay Magazine, Virginia Living, The Rivah, and more. In 2015, his Clams Espağnole took him to the Final Four of the “Virginia is for Lovers Culinary Madness Challenge” to cook for several celebrity judges, including the First Lady of Virginia.

And now, in a well deserved and planned out move, Bistro visionaries Mac and Jc Casale, as of late 2017, have leased the White Dog Bistro over to Chef Walter as the new business owner of his own Taste and Sea LLC which continues to trade as The White Dog Bistro. He is joined by his wife Amanda as the General Manager.   Together they invigorate the warmth of the Bistro’s small town charm. He insists that fine dining should not be pretentious, and is often heard saying that “good food is only great food when enjoyed in the company of great people.”   To that end, he can often be found as much in the dining room, chatting with old friends and newcomers alike, as he is in kitchen bouncing from stove to stove in concert with his adept Chef de Cuisine, apprentice, and line cooks. Just don’t ask what he recommends, because he is convinced every menu item is his favorite, depending on the time of day. Why else would he put it on the menu?